You are here: Home » Cinema/theatre/TV » Twirlywoos Live! at London's Southbank 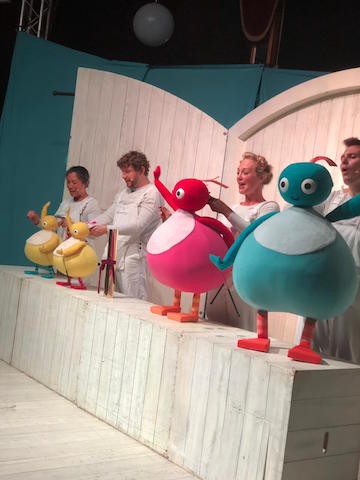 We were all very excited to see the Twirlywoos Live! show, brought to life on stage for the first time at the Underbelly Southbank Festival this summer. Taking along two three year olds and a one year old, we came away from the Southbank crowds into the magical theatre where there's plenty of space for the children to sit on the mats up front and get close up to their favourite Twirlywoo characters.

Toodloo, Great BigHoo, Chickedy, Chick and Peekaboo are portrayed by puppets animated by actors taking them on their adventures as they set sail for London onboard their Big Red Boat. The show lasts 55 minutes and is suitable for children from age one upwards. Our one year old was completely gripped the whole way through and the three year olds found the mischief and jokes very funny. They oo'ed and ahh'ed the whole way throughout.

For a colourful, musical experience for any CBeebies and Twirlywoo fans alike, I highly recommend that you catch this show on the Southbank running until 31 August. What's great is there is so much to do in the area by the theatre to make a day of it – take a river boat trip, the London Eye, watch the entertainers, Royal Festival Hall, a play park and plenty of space for a picnic.

Twirlywoos Live! is produced by MEI Theatrical, whose productions include The Very Hungry Caterpillar Show, playing at Troubadour White City Theatre this August celebrating 50 years of the book, and Sarah and Duck Live on Stage, which premiered at Polka Theatre before touring the UK.

It is written by Zoe Bourn, who has depicted some of the world’s best-loved children’s titles including Thomas and Friends and Fireman Sam Live!