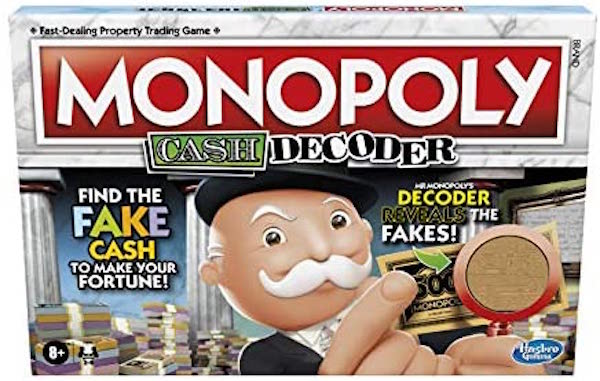 There's nothing like a board game to bring out the worst in some players and Monopoly must rate high in this category. My father taught my sister and I to play – and he always won. When I once suggested a game to two friends, the male said it wasn't worth playing as he always won. He was out of the game within a few rounds and went off in a sulk. Somehow Monopoly and the prospect of being a property magnate has a curious effect on even the nicest people!

So now from Hasbro we have a new version of the iconic game – Monopoly Cash Decoder. So what's different from the classic game? The layout of the board with the place names and colours is the same. If you have an old version you'll see that the prices have been inflated and the four stations and utility companies are gone as have the pay your taxes. But Jail, Free Parking and Go to Jail are still there as are the Community Chest and Chance cards.

The big difference is there is skulduggery afoot with fake cash and fake chance cards. To shake things up that little bit more, Mr. Monopoly is giving players his special decoder so players can seek out the fakes, but still rule the board and make a fortune. Now you can take challenging your opponents to a whole new level, by using fake accusation coins. Players can either keep these close to their chests or call opponents out for faking it! But here’s where it gets tricky, you only get a few coins to play with (so use them wisely)!

There are two train spaces and if you land on one you advance to the next unowned property. The aim is to make as much money (fake or real) as possible and the game ends when all the properties are owned. All you have to do is trick your opponents the whole way round the board to win – but will you get away with it? And will anyone still be speaking to you afterwards?

A game for two to six players (aged eight plus) or you might like to double up with younger players.

Priced at just £24.99, this is the Monopoly for Christmas 2021, available at most major retailers now.