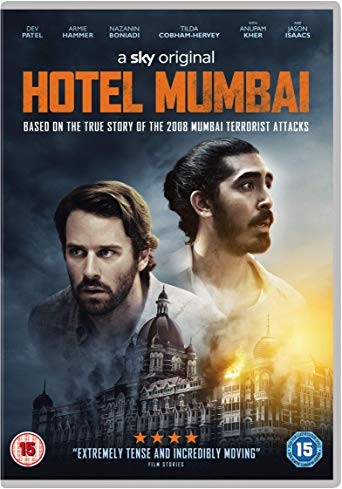 I had wanted to see Hotel Mumbai when it was released last year in cinemas but sadly missed it so I was delighted to received the DVD for review not least because some time ago I worked on the book on which this was based. The book gave far more background detail and more intricate plots but what shines through for me – and the film does this brilliantly – is the heroism of the staff at the Taj Hotel.

The Taj Mahal Palace Hotel is an institution. The staff were – and still are – held to the highest standards. The building is magnificent, the facilities out of this world and this is why it was one of the targets for the terrorists in 2008. Only the super rich could afford the opulence the hotel offered.

Among the dedicated hotel staff are the renowned chef Hemant Oberoi (Anupam Kher), Butler Jamon (Alex Pinder) and a waiter, Arjun (Dev Patel) who risk their lives to protect their privileged guests. It could be said some of the guests don't deserve such sacrifice especially when you see the the luxury of the hotel counterbalanced by the poverty of the squalid living quarters of those heroes.

This is an action packed, intense film, necessarily, unflinchingly, uncompromisingly violent. The terrorists are young men who have been indoctrinated and trained to kill and it does not make easy watching.

It is a loving tribute to the loyalty of the hotel staff.

Bonus feature includes a fascinating behind the scenes special – interviews with the cast expressing their own impressions of the parts they play.