You are here: Home » Great days out » BFG: Dahl Centenary 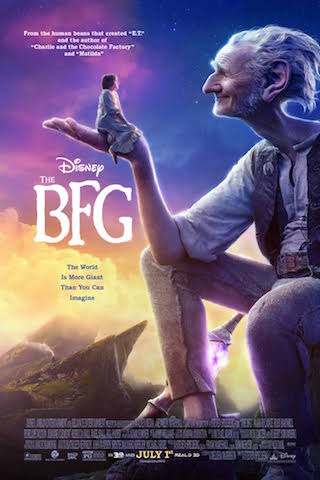 With Spielberg’s BFG released on 22 July, locations across England will be brought to life on the big screen. And, with celebrations gearing up for the centenary of Roald Dahl’s birth on 13 September, there’s an abundance of scrumdiddlyumptious activities to get involved in across the country this summer.

Here VisitEngland rounds up the best Dahlicious days out for "human beans" of all ages to enjoy.

Roald Dahl Museum and StoryCentre (Throughout 2016)

The Roald Dahl Museum and Story Centre is taking a year-long journey, exploring the stories, characters and life of the much loved author. There will be special displays and activities, with Roald Dahl Day celebrations on 17 and 18 September, when Great Missenden is to be transformed into the Village of the Unexpected.  Museum admission costs £6.60 for adults and £4.40 for children.

Come and watch the annual community event that brings together over 1,000 school children and an audience of approximately 5,000 to celebrate the imagination and work of Roald Dahl, with this year seeing a BFG theme. See larger-than-life puppets and colourful artwork, made by children and young people in the local area, parade through the streets of Aylesbury. The parade’s sights are matched by the sound of boisterous samba and brass bands and street entertainers: sure to get you in the festival mood.

Wondercrump World of Roald Dahl, London (until 3 July) then Cardiff

Recognised as one of the country’s most inventive interpreters of Roald Dahl’s work, Illyria will present Danny the Champion of the World in an outdoor performance at Bignor Park near Pullborough as part of the cultural festival. Enjoy a pre-show picnic before settling down for an afternoon performance from 2.30pm. Adults £9, children £7.

Join Tatton Park for some tremendous adventures, and expeditions of discovery. See Fantastic Mr Fox at the Farm, whilst dressing up and creating invites to Mr Fox's Feast; go on a journey through the gardens with Danny Champion of the World, and see Matilda in the Mansion where you can have fun in the Roald Dahl inspired activity room and discover the curious world of Matilda Wormwood. If you're brave enough you can even go deep into the jungle to try and find the Enormous Crocodile. Totally Tatton Twit Ticket (including entry to Mansion, Gardens and Farm) costs £27.50 for a family (two adults and up to three children) or £11 per adult and £5.50 per child.

The BFG in Pictures, House of Illustration, Kings Cross, London (until 2 October)

To celebrate Roald Dahl's 100th birthday and the much anticipated release of The BFG movie, London will be transformed into a dream land inspired by Dahl's beloved children's book. Trafalgar Square, Arsenal’s Emirates Stadium, St Paul's Cathedral, Leicester Square, Tower of London and the home of Dahl himself in Great Missenden, will each play host to giant dream jars which contain the dreams of celebrities and top artists. Expect to see the imagined dreams of Steven Spielberg, Sophie Dahl, Quentin Blake, Nadiya Hussain of Bake off, Paralympian David Weir, Game of Thrones' Maisie Williams and Arsenal Football Club. The BFG Dream Jar Trail has been inspired by the dream jars in the film, which the BFG uses to store good and bad dreams. After the trail has ended, the dream jars will be sold at auction, with proceeds going to the Save the Children charity.

Internationally celebrated as Roald Dahl Day, September 2016 will see schools, libraries, bookshops and community groups invited to host their own party for Roald Dahl 100, using a comprehensive party kit which can be downloaded online. In line with this, Dahlicious Dress Up Day will be marked in Schools across the UK in support of Roald Dahl’s Marvellous Children’s Charity.

The Royal Shakespeare Society's multi-award winning production of Matilda the Musical will celebrate its 5th birthday in London’s West End in October. Inspired by Roald Dahl, the musical has been written by Dennis Kelly with music and lyrics by Tim Minchin.