Lyme Disease: Medical Myopia and the Hidden Global Pandemic (Hammersmith Books) features expert insights and opinions from around the world looking at the current state of Lyme Disease, future predictions, offers ways to stay safe, treat and prevent Lyme Disease, considers the problems with diagnosis and disparities in treatments. 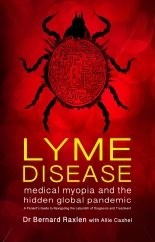 On average, it takes patients seeing five to ten different doctors from multiple specialties to obtain a proper diagnosis. Children play in long grass, roll down hills, run through parks and fields, and spend lots of time outside, making them open to bites from an infected tick, which are mainly found in grassy and woodland areas including urban gardens and parks.

There are steps that can be taken to prevent Lyme Disease, such as removing clothes after playing outside and having an adult check for ticks, but there is a real lack of awareness of the profound impact Lyme Disease can have if left untreated. According to a study in the American Journal of Medicine, long-term Lyme Disease patients that were not treated early on are often as impaired as those in congestive heart failure. The disease is so misunderstood that there are even myriad cases of parents being falsely accused of poisoning their children (Munchausen's syndrome by proxy).

The disease is treatable with antibiotics, but left alone can become a severely debilitating illness which affects multiple organs, including joints, heart, brain and other parts of the central nervous system.

Where are the high-risk areas?

Early signs your child may have been bitten by an infected tick: